You are viewing this site in staging mode. Click in this bar to return to normal site.
Home  ›
Products / Services  ›  Washing Powder  ›  Softened Water Washing Powder

Harvey Softeners have developed a unique and special non-bio washing powder that takes advantage of all the benefits of softened water. It also outperforms the UK market leader. 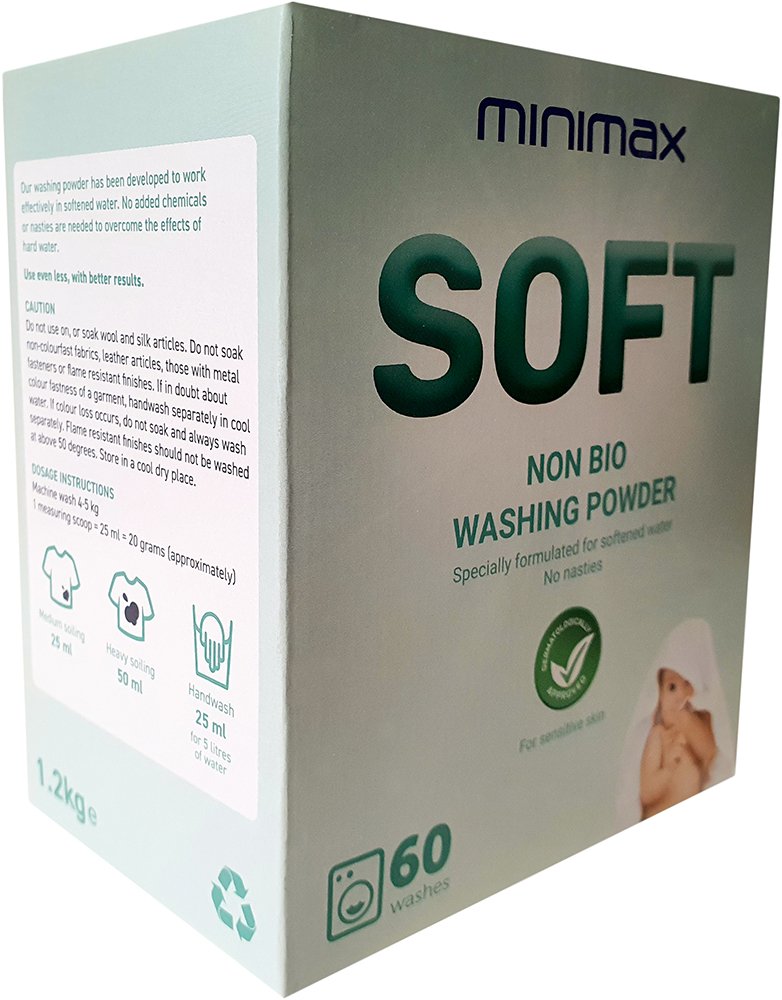 The Facts and Science

Using industry-standard test protocols, our washing powder has been proven to demonstrate greater cleaning power than the market-leading UK non-bio, Persil and uses 39% less powder. However, this is under lab conditions.

In reality, in hard water areas, the savings are greater. In hard water areas, additional doses of normal powder are required to overcome the effects of the hard water. Please see the document ' Comparison between Hard Water v Softened Water on page 5.

Harvey's washing powder has been dermatologically tested at Reading Clinical Research and approved as suitable for sensitive skin. View XXXXX

Who will be designated as the "Competent authority" in the UK?

The Competent authority in the UK is the Chemicals Regulation Directorate (CRD), part of the Health and Safety Executive (HSE).

Is there a requirement to register detergent products in the UK?

There is no requirement in the UK for the registration of detergent products. However, they must comply with the requirements of the EU Detergents Regu­lation (Regulation (EC) No 648/2004).

The legislation looks to regulate in a light-touch way, which means all the manufacturer has to do is ensure that the product meets the biodegradability and labelling requirements in the Detergents Regulation. They must hold a dossier of information proving this and should provide it to the competent authorities upon request.
Regulation 648/2004 is implemented in UK national law by the UK Detergents Regulation (SI 2010/740).

The provisions of the national legislation correspond with the provisions of the EU Regulation in all but one regard. The only difference is in paragraph 9 of the national implementing legislation which imposes a requirement that from 1 January 2015 only detergents with a weight of phosphorus in organic phosphate of 0.4% or less of the weight of the detergent can be placed on the market. Link to the national law. However, the UK restriction has been superseded by an EU restriction.

The EU published Regulation (EU) No 259/2012, amending Regulation 648/2004. This imposes a restriction on phosphates in domestic laundry and dish­ washer detergents.

The Detergents Regulations 201O have been introduced, superseding the 2005 Regulations, setting out measures to enforce Regulation 648/2004. The Regulations will be enforced by local authority Trading Standards Officers.

Other products to be considered as detergents are:

This definition of 'detergent' means that manufacturers of cleaning products not containing surfactants will need to comply with the labelling and other data provision require­ments of Regulation 648/2004.

Unlike a Directive, a Regulation is "directly applicable" and applies throughout the European Union on its own, without the further need for domestic legislation. However, domes­tic legislation needs to be made to provide for machinery to deal with applications for derogations and to provide for enforcement measures (including criminal penalties for breach of Regulation 648/2004). This domestic legislation takes the form of regulations made under section 2(2) of the European Communities Act 1972. Regulations will be issued in two stages: The Detergents Regulations 2005 set out enforcement measures and came into force on 8 October 2005. This enabled us to consult more fully on the procedure for handling derogation applications before introducing new legislation in 2010.

Does Regulation 648/2004 extend to organic substances such as enzymes, microbes and bugs?