You are viewing this site in staging mode. Click in this bar to return to normal site.
Read Our COVID-19 Update – May 2020

As of the 1st May 2021, our team are Lateral Flow testing for the symptoms of COVID twice a week, in order to keep our staff, customers and families safe.

Our team continues to follow all strict social distancing guidelines, including sanitising and now the wearing of masks in customer homes where customers are present and this is appropriate.

Our salt was manufactured and stored on pallets more than 30 days ago, and will only have been touched by the member of our team who delivers it, and their hands will be sanitised. We will deliver your salt to your home, and if safe to do so, will leave it in your desired location. If you would prefer your salt to be left outside your home, then we will ascertain beforehand where your preferred safe point is.

As a final precaution, when we are on our way to your home, the individual coming (Laurence, Alex, Paul or Pete) will also call you to confirm that not only are we experiencing no symptoms, but to ascertain that no circumstances in your own home has changed either.

We remain committed to the safety of our clients, and together we will get through this safely.

Any questions, please call Laurence on 07976 036101 or email the team on hello@hydroworks.co.uk

Which salt is best for my water softener?

There are different types of salt available in the UK, some of which can be used in water softeners, and others that definitely shouldn’t.

For many years, the only salt available for water softeners was granular salt, but this had a tendency to create a mess, and so tablet salt was created.

Tablet salt has been very popular and for many years, until the development of block salt, tablet salt became the biggest selling salt in the market, both domestic and commercially.

Bit by bit, the use of granular salt has dwindled in favour of its brother, tablet salt. Easier to use, and less mess too.

It wasn’t until recently that the real damage that granular salt causes to softener valves became universally understood. Some individuals in the industry had been talking about their concerns of granular salt for a long time.

It is now not recommended to use granular salt in water softeners.

“I noted very early on in my career that some softeners had scoring on the valves, both plastic and metal. This scoring was caused by fine granules of salt being sucked up by the brine valve, and being pulled across the valve. The problem this creates is that seals then can’t do their job properly, and softeners begin to malfunction. In ideal circumstances, softener brine valves would have a suitable screen to prevent debris ingress and scoring, but all too often, the smaller granules of salt are still making their way through."

"When we bought Hydroworks in 2016, I decided to implement an instant ban on selling granular salt for softeners and began the process of educating our customers on the reasons why tablet salt was a better alternative for them. Of course, one reason companies often don’t always tell their customers about the damage that granular salt can cause is that it keeps service intervals frequent and maintenance costs high, making an extra profit for the service company”

What should I do if I'm still using granular salt?

If you use currently use granular salt then you should move towards tablet salt at your earliest opportunity.

Ideally, to give your softener the best chance of lasting longer, the cabinet should be washed out to remove any sharp granular fines and salt sludge. That would also be a good time to clean out the valve of the softener, replacing seals and finely lubricating to ensure the best performance and longer life.

Hydroworks offer a FREE Health Check, so if you are unsure if you need this to be done, you are more than welcome to ask us to come and check your softener for you and give you the best advice.

Here is what the four different types of salt commonly used in water softeners look like.

There is one salt you should never use in a water softener. On occasion, we have been out to clients homes or businesses and found that they have used fine salt in their softeners. To the average person, we would call this type of salt “table salt” 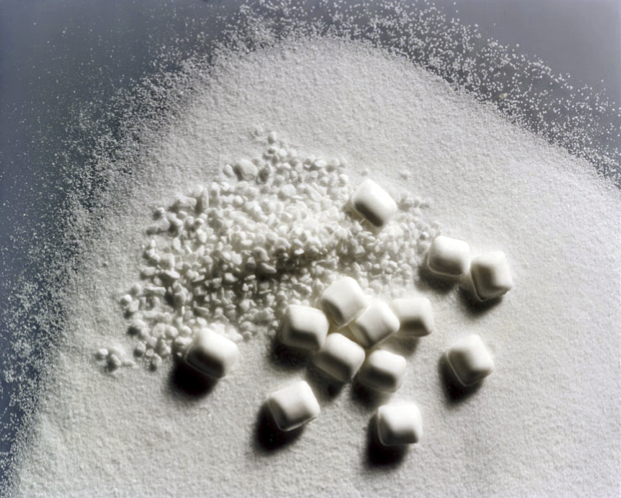 Fine ‘table salt’ is even more damaging to softeners than granular salt as it is so fine that it is easily sucked up by the brine valve and will scratch the plastic and metal components and damage the seals and pistons of the water softener.

The evolution of block salt

In the mid-1990s, Harvey Bowden of Harvey Softeners (which in those days was trading as Kinetico), had developed for the UK market a version of the American twin cylinder softener and found that customers loved the convenience of these smaller softeners that were nonelectric.

Over dinner one evening, his closest friend, Geoff, suggested that it would be amazing if Harvey could create blocks of salt in the same style that animal salt licks were created. Harvey loved the idea but found out that he could not patent the block salt concept as animal licks of a smilier style were already in use - but that did not deter Harvey and he went on to create a larger block of salt for water softeners from pure food grade salt.

When block salt first hit the market, it was sold in cardboard boxes and only one pack has survived the years which we presented to Harvey a few years ago as thanks for all his support. Harvey’s traditional softener competitors tried for years to disrupt block salt softener sales by telling customers that the cost of block salt would just go up exponentially once the customer had a block salt softener. However, quite the opposite has happened. Harvey surprised the market by making sure that regardless of what happens to salt pricing in the UK, block salt prices haven’t gone up.

Here we present probably the last remaining original block salt in it’s cardboard packaging to Harvey, as thanks for his mentorship and friendship.

It is at this point that the whole discussion on salt for softeners becomes a little bit more complicated.

Water softener salt should be Food Grade salt which is a crystalline product consisting predominantly of sodium chloride. Most food-grade salt is evaporated salt with salt is heated and evaporated to crystallise the salt.

Put simply, water softener salt is then graded into two categories; Grade A and Grade B

Grade B quality is either obtained from the sea (Marine) or is PDV (Pure Dried Vacuum from Marine salt).

How Grade A PDV salt is typically created? 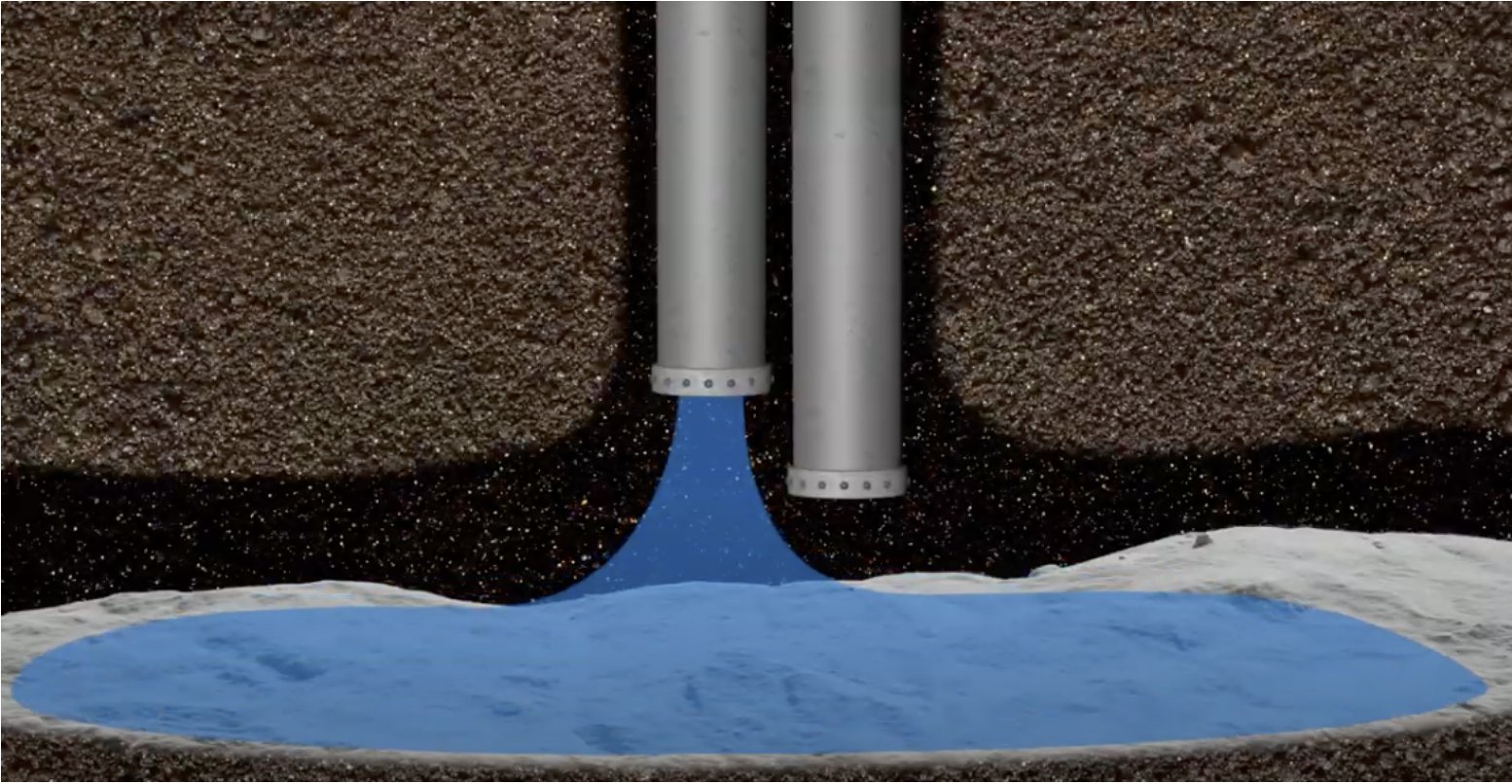 …and then that brine is evaporated into large scale evaporators using heat from natural gas for Grade A salt, and natural solar heat in Grade B salt. 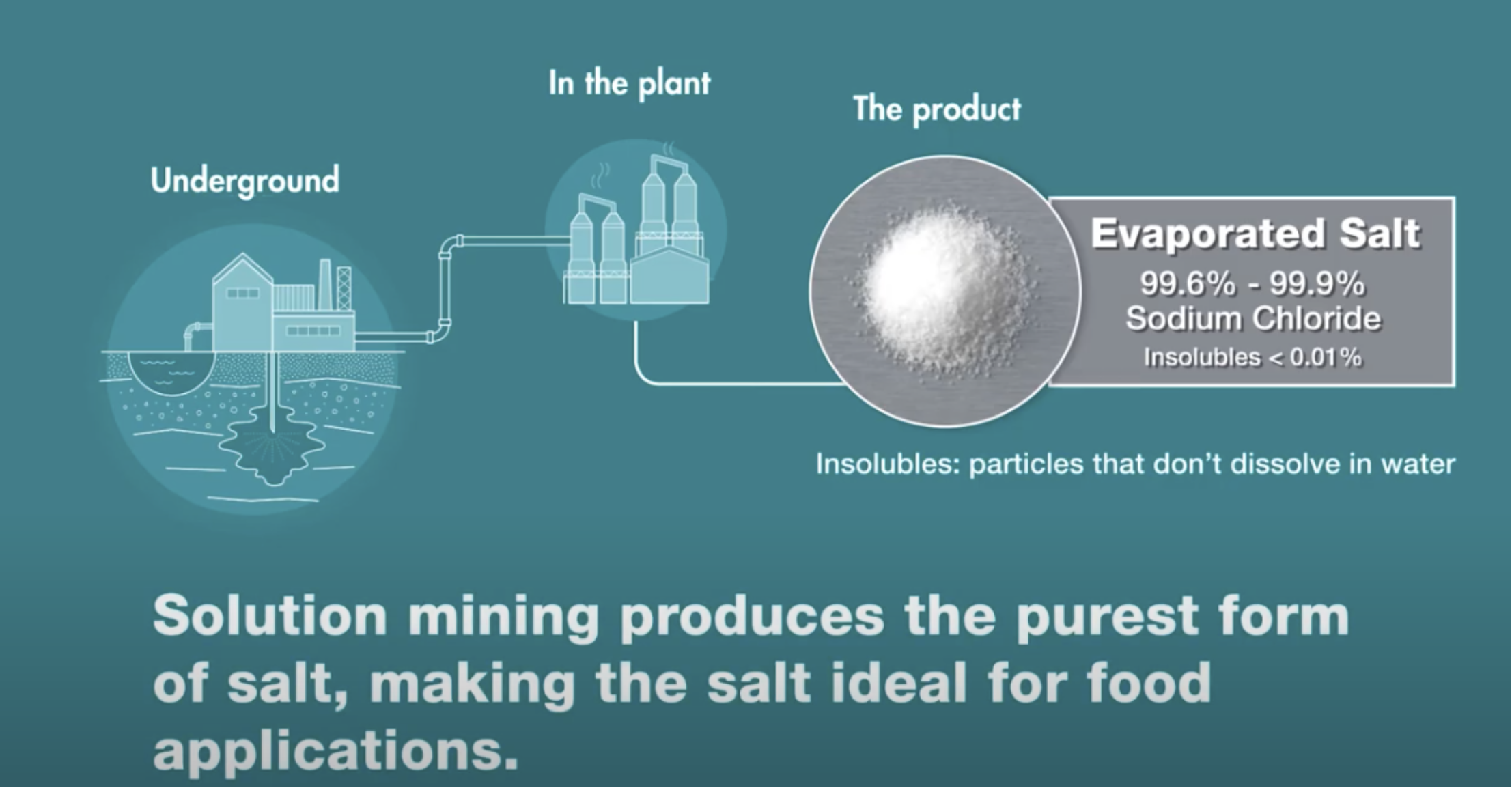 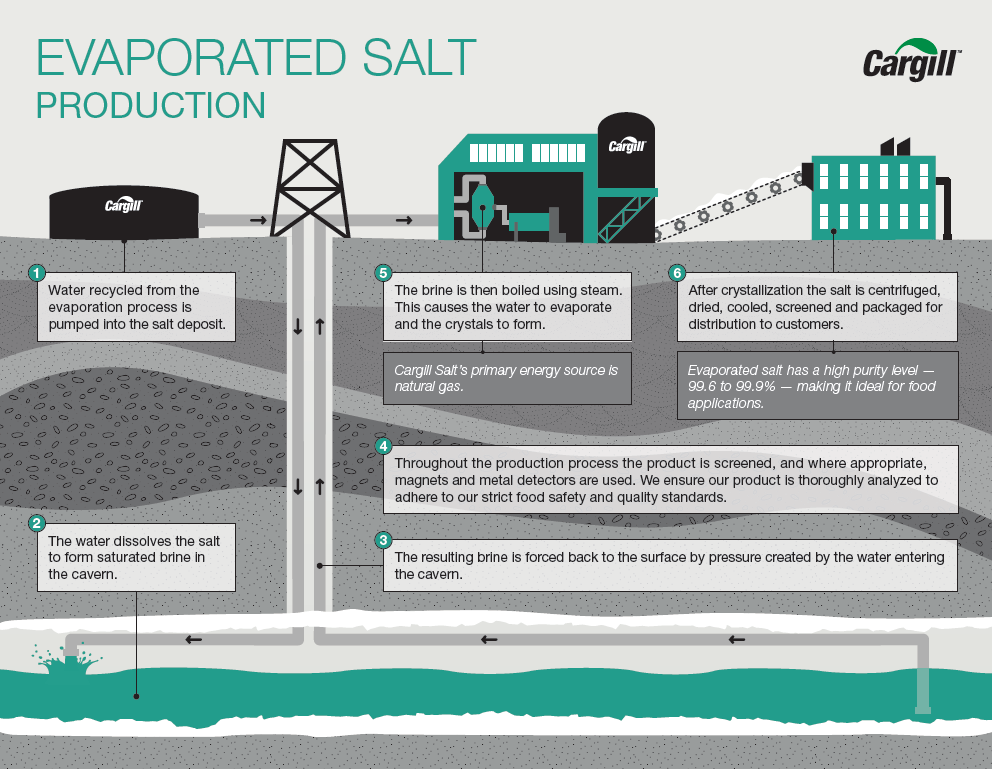 Why is Grade B PDV (Marine) salt less pure?

Grade B PDV salt comes from seawater which is directed into large outdoor ponds. Using just the sun, wind and time, the water evaporates and salt crystals are left behind. The salt is then washed and processed into either granular, tablet form or block form. Marine salt does however contain impurities, which makes the salt darker as it dissolves, which will result in a scum forming on the top and around water softener brine tanks. 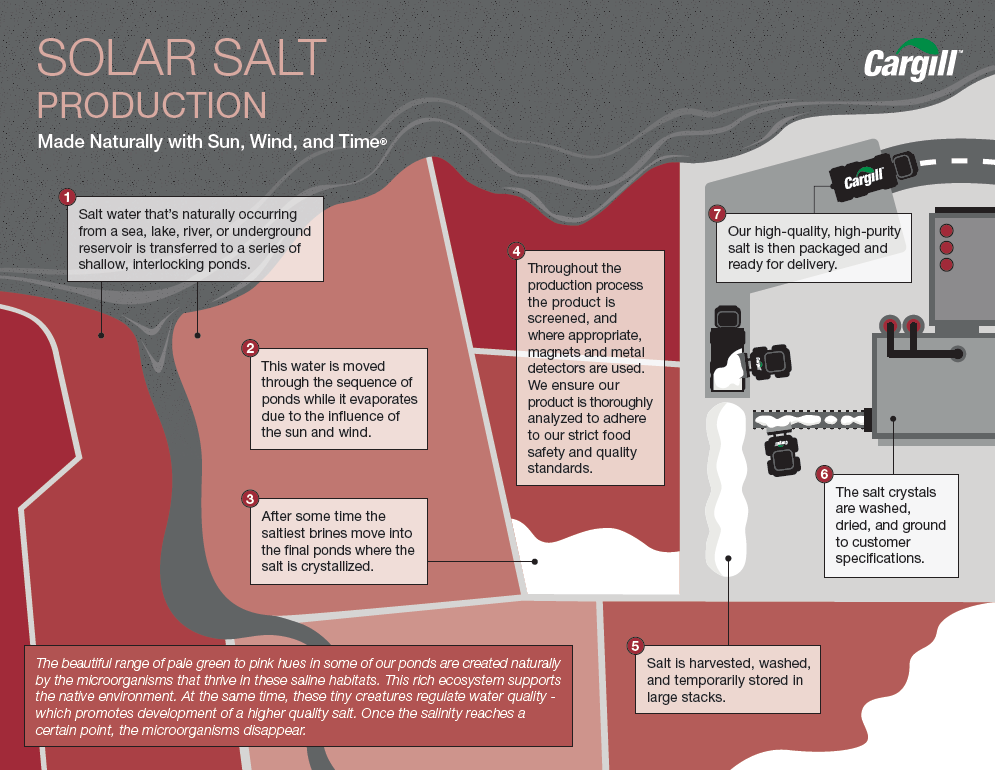 IMPORTANT: The marine salt used in water softeners should be a minimum of Grade B, and all single-cylinder manufacturers have indicated (by way of no-comment) that they are satisfied that this salt is pure enough for their equipment.

Both Harvey Softeners and Kinetico have stated that if Grade B salt is used in their softeners, this will invalidate the warranty!

Their reasons for this is that block salt softeners work off a pure brine solution at the bottom of the tank, and the level of impurities and scum that is created will create blockages in their machines and impact on the plastics.

Harveys have in recent years become so worried about the damage that the impure salt is causing that they have now created a new patented smaller curved block salt which enables them to guarantee the quality and thus protect the customer guarantee. You will, however, need one of their new machines, such as the Minimax Innova for this salt. If you have one of their older models, then just make sure you are purchasing a Harveys, Aquasol or Kinetico branded salt.

An example of Grade B Block Salt

Here is a customer home we were in recently. They have been using Grade B block salt, unbeknownst to them.

They have only been using this salt for a short period of time, so we have been able to give them the right advice, clean out their cabinet, and brine system. The black build-up in the bottom of the brine system is very damaging to block salt softeners that operate on a pure brine solution. The reason it is so damaging is that it coats the plastics of the softener with a marine slime, impacting the ability of the softener to work.

Once again, if you are in any doubt, Hydroworks offer a FREE Health Check, so if you are unsure if you need this to be done, you are more than welcome to ask us to come and check your softener for you and give you the best advice.

As mentioned previously above, single-cylinder softener manufacturers have tended not to comment on the type of salt that is suitable for their softeners, and for many years, Hydroworks have used a Marine Grade A & B salt in those softeners without any degradation to the quality of softened water or any obvious damage to the machines.

We have noted, however, that as softeners become more common across Britain and Europe, there are many more imported salts entering the UK as companies jump into the salt manufacturing fray, and this has inevitably seen a direct link to a degrading of salt quality.

Tablet salt comes in both easy-to-lift 10kg bags and 25kg bags. The smaller 10kg bags cost slightly more, but the convenience often outweighs the small price differential between those and the larger 25kg bags.

Block salt is sold either in 8 kg packs or 4.3 kg packs. The heavier 8 kg packs are made for all older model block salt softeners including Kinetico models. The Lighter weight 4.3kg pack is specifically made for the Harveys Arc, the Minimax Innova and the TwinTec Cobalt (or S5).

Price for price, both block and curved block salt should cost the same, kilo for kilo.

The reason that Harvey softeners created the curved block salt was that they were increasingly getting requests from customers for a lighter weight block, and this gave them a double opportunity to guarantee sort quality by taking control of the salt manufacturing process which they did in the beginning when they first invented the original block salt. The difference is that this time they've been able to patent the salt. It is commonly felt within the industry that this is the ideal solution, as increasingly, poorer quality block salt is entering the UK market which is damaging machines and impacting on customer warranties.

The new curve salt can fit easily in some older block salt softener machines such as Kinetico softeners, so if a customer wished to purchase the lighter weight salt, that may be possible.

We'll show you how their softeners were installed too!